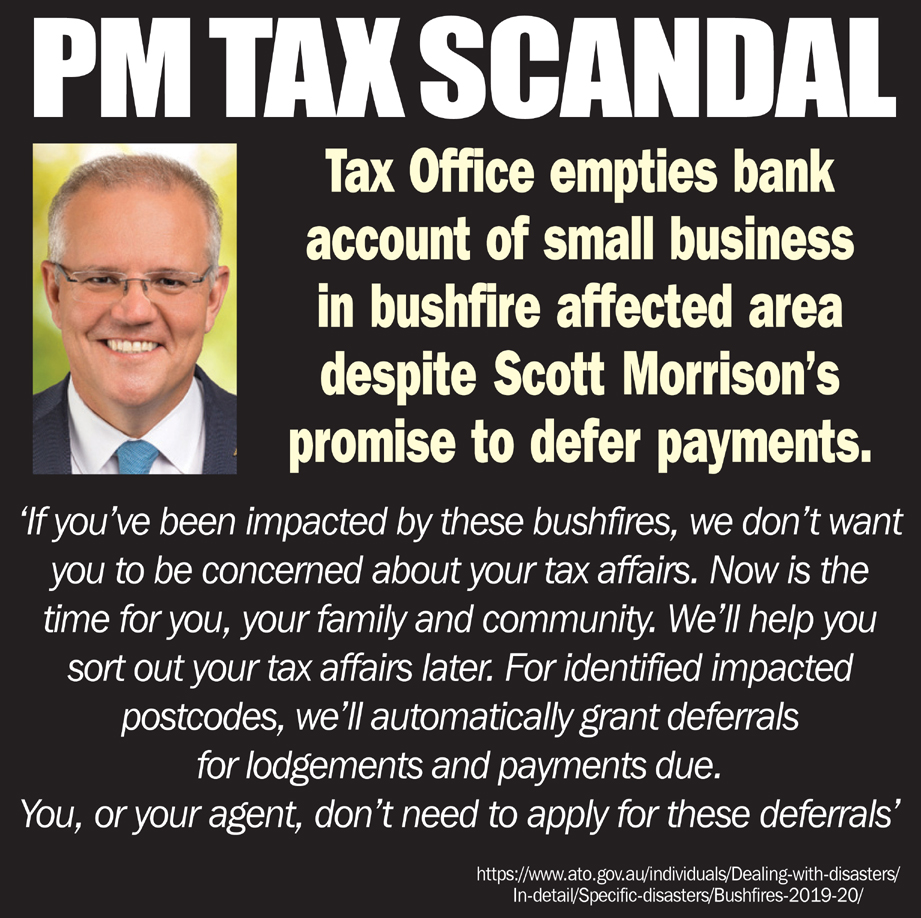 A north-east Victorian small business located in the bushfire area has had its bank account emptied this month by the Australian Taxation Office, despite promises by Prime Minister Scott Morrison that automatic payment deferrals would be granted to all taxpayers in bushfire affected postcodes.

The Government’s move on the small business’s bank account means that the company is left with almost no money in the January period when it has no income. This means the business is currently unable to pay its bills to its suppliers, many of whom are also based in local bushfire areas.

The reputable business has been established for decades. It had a proper scheduled arrangement in place with the Australian Taxation Office. Then came the fires.

“I have a couple of debts with the Australian Taxation Office and repayment arrangements have been agreed,” explains the business owner.

“When the bushfires hit I was comforted by the Prime Minister’s announcement about tax relief and deferrals of instalments. A little breathing space, so to speak.

“However, being aware that sometimes Government intentions/announcements do not always feed through to the bureaucracy I checked the ATO website to be sure we had relief.

“I was happy to see that no application was needed. Indeed I was assured no action was required. I relied upon that Government statement.

“Come my January instalment date and the ATO had ravaged my overdraft account for the instalments.

“Like any good citizen I phoned the ATO. I spoke with a genuinely sympathetic and concerned officer. He was not aware of the Government/ATO statement and after some effort informed me that he could not reverse the January instalment deductions.

“He informed me that the deferral could only be made after an application. I thanked him for his efforts and have a short term deferral of instalments to reach a catch up position.

“In the meantime with no January income and the ATO induced attack on my overdraft facility I am unable to pay my suppliers, many of whom are local,” the business owner said.

• Our newspaper company (Local Media) is not the affected business. We are reporting on the problem being faced by a long-established business in Victoria’s north-east. The business is in one of the declared bushfire municipalities in the ‘State of Disaster’.