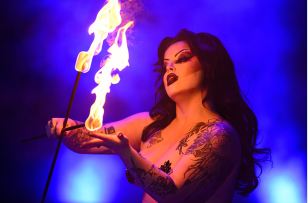 The world premiere of Oracle was performed at the Playhouse Theatre and the audience were taking on an extraordinary, magical and captivating journey that slowly revealed the birth of each Zodiac Constellation. The journey did not disappoint and as the show progressed the audience became totally immersed in the action on stage.
The journey begins in ancient Egypt as Ma’at the Goddess of Truth and Justice (and symbolised by a white feather) weighs the good and bad deeds of the soul. Those souls whose good outweighed their bad, were granted entry into the afterlife and the others were sent to meet the Devourer of Souls and condemned to spend eternity in Hell.
Anubis, the jackal-headed deity who was an embalmer, placed the hearts of kings on one side of a scale and a feather on the other. These scales are referred to as The Anubis’s Scales and are the symbol of Final Judgement.
Each Constellation introduced through the combined art of circus, burlesque, and dance and through the creative genius of Bass Fam, is displayed in this cohesive and provocative work in which he combines the roles of writer, director, and producer.
Betty Bombshell as a burlesque dancer was amazing as the fire-eating Hercules, Keeva Svikart (belly dancer) was an outstanding and convincing Anubis. Reed Kelly and Jack Dawson performed incredible aerial circus flawlessly providing tension and drama to the show.
I was also captivated by Adam Malone with his precision and disciplined skills with “hoops”. Jazmin Varlet plays the Oracle and was the thread that wove each act together with her presence and powerful evocative vocal skills.
This is a “must go to show.”
The production pushes the boundaries in creative innovations through the marrying of circus, burlesque and dance, thus setting a new standard for such offerings.
Review by Mary Downie